Art Among the Chaos
Studio Stories by Jacqueline Williams

Art Among the Chaos

Still Life with Roses and Shells

When artists look back at their careers, they often use their education and significant events as a framework for the story. But in this article, Jacqueline Williams  tells us about life through the lens of the various studios that she has occupied over the years. From shared student space to her current private studio where she has been busy with final preparations for her exhibition 'Tapestry of Light' at the Russell Gallery.

"I have fond memories of my first studio at the Royal Academy Schools. After battling through London traffic, it was always a relief to pass through the main corridor lined with dusty classical plaster casts and into my studio. Shared with two other students, it was a beautiful white space with a sloping north-facing glass roof.

It was pretty near the perfect studio with its proximity to Cork Street, the National Gallery and other major galleries. We also had practising eminent artists teach at the schools, but like many young people we took it all for granted. 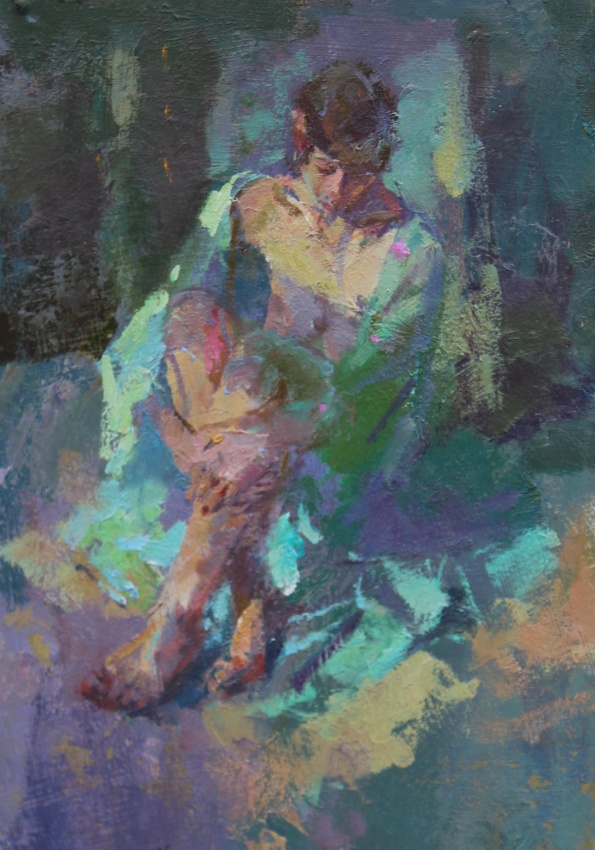 It was a tight-knit community. There was only a small intake of students each year, so we all worked and socialised together. We were overseen by the two porters Bill and John. They very much acted like protective parents; they knew all the comings and goings inside the schools. They were there to give us a 'ticking off’ for late arrivals, as well as shielding us from the outside world. I got many little after-hours jobs upstairs in the galleries for private functions, serving wine or acting as cloak attendant, thanks to them which very much helped the student cash flow.

At the end of the three years, it was with a sense of excitement and naivety that I landed my next studio space in Cheltenham. A kind family let out a spare room in the front of their house. Having experienced what some would say was the quintessentially perfect studio, I had to compromise. So it wasn't a north-facing room but east. The space had considerable character, being early Victorian, and had two large windows. But best of all, I was only paying £20 a week. The downside was that it had a trap door in the middle of the floor to the cellar where the owner kept his wood pile – a quirk I was willing to overlook.

After seven happy years, I moved on to a former college built in the Venetian Gothic style in 1869. The owner sublet it to a friend who ran a jazz club in what had been the canteen. Various students worked behind the bar. I had a former science room and it was an incredible 30 sq ft – a great luxury to have so much space. The windows were arched, facing east and west. It was a great place and there was never a dull moment. An Australian ‘Indie’ band lived just down the corridor and an upholster next door to me. Unfortunately, after two years, a buyer was found for the building and I was asked to vacate the premises ‘pronto’. Just in case I didn’t get the message, I found my studio totally trashed and several window panes smashed in where furniture had been thrown through them. Luckily for me, they hadn't touched my paintings.

‘Still Life with Roses and Shells’

This inspired me to buy a workspace rather than rent again and resulted in me acquiring my current studio – a top floor flat in a Regency building. Again, not a perfect space but I have adapted it to suit me. There are three south-west facing windows, which aren't the tall floor-to-ceiling variety that I yearn for, but the modest bedroom size. I’ve had this space for over twenty years, so it has become rather cluttered. In fact, if you think ‘great aunt’s living room’ you'll pretty-well sum up the look. I have a lot of nick-nacks collected from junk shops to use in still lifes as well as mirrors, tables and chairs. Mine isn’t the church-like pristine fantasy studio but more a sort of ordered chaos.

It doubles up as a framing workshop when it gets close to a solo show. A trestle table is unfolded and I gesso and gild all my own frames, a necessary skill that I taught myself in order to save money. We artists are a very adaptive species. 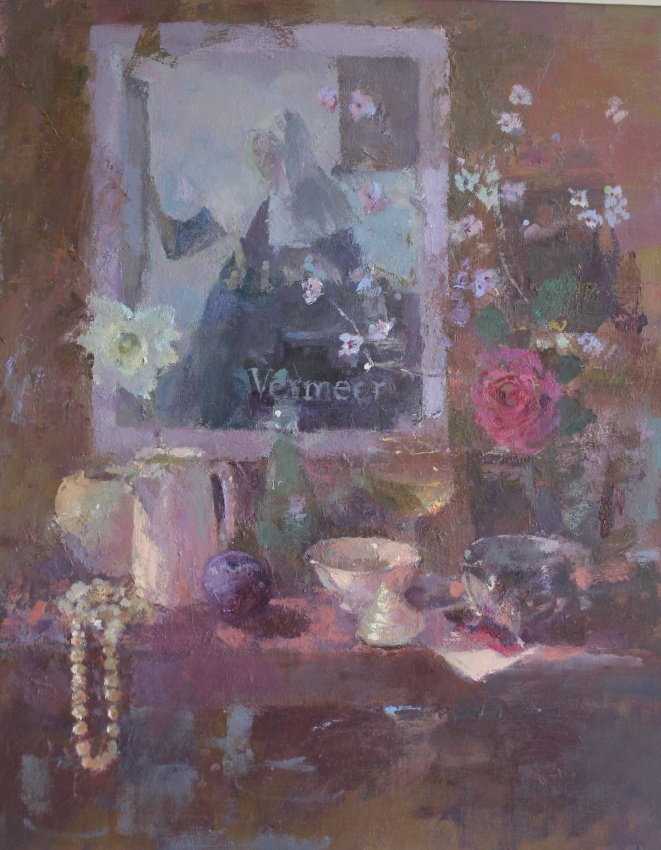 I do try and maintain a routine amongst the chaos. The day starts for me with an early rise at 6am where I catch up on news, social media, email and breakfast. Then it’s a walk around a local meadow with two borrowed dogs who live round the corner from my studio. It is my constitutional walk and helps get my head in order: to decide what to paint, and to rid myself of any annoying anxieties. Once in my studio, on a good day, I get on with it but sometimes I still find the need to prevaricate and decide the floor or sink needs clearing. After which, having a cuppa in my hand normally leads to a brush being taken up.

The studio, unlike the one I shared at college, has the great advantage of being a totally private space. This is a true luxury that I have come to fully appreciate, especially as I have become older. The college situation when I was a student - of tutors wandering in and the constant flow of fellow students passing through our shared studios - didn't annoy or cause much friction then as it would now. I even find it hard now to work in public spaces with inquisitive passers-by, except perhaps when abroad painting where I don’t speak the language. 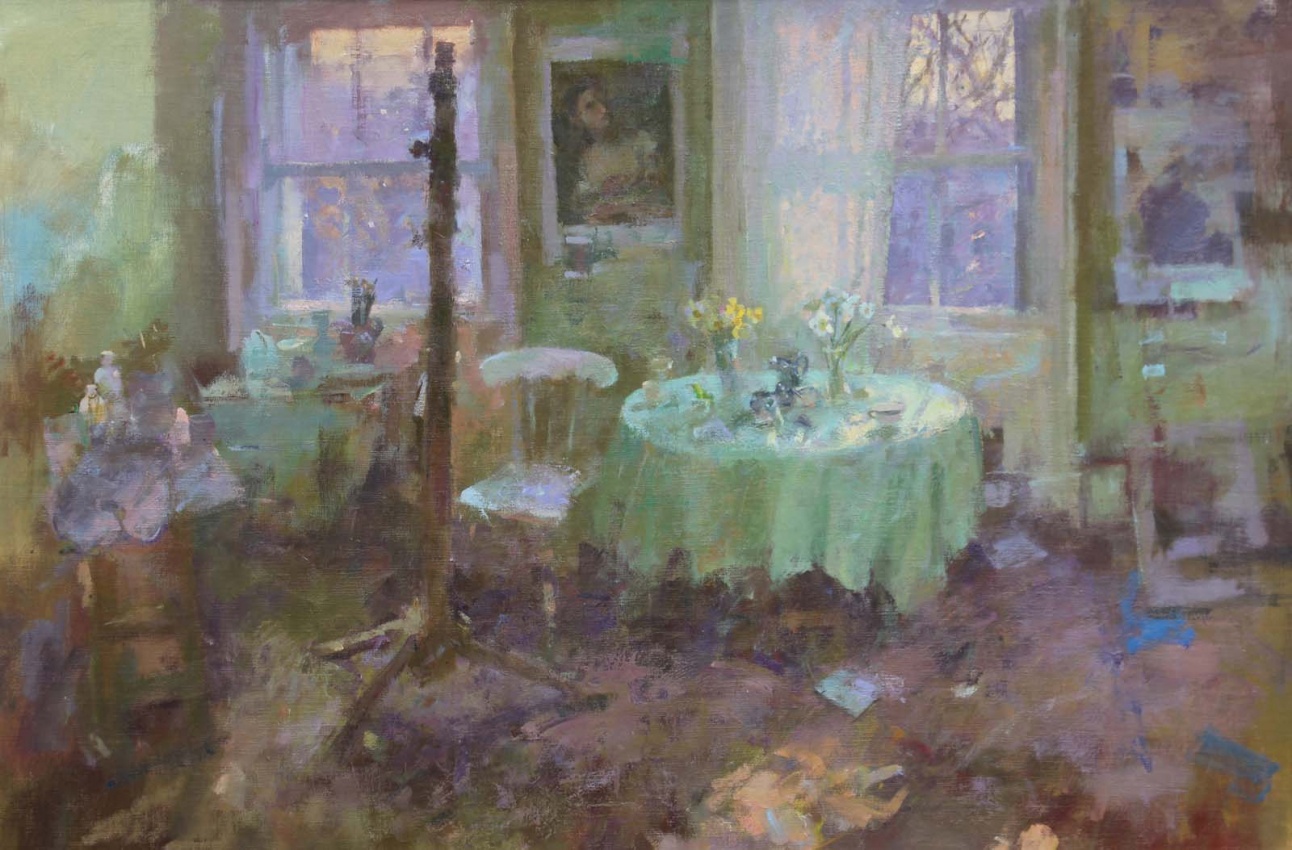 The only person I share my studio space with is my model Robin who has been working with me for over ten years. She has become a good friend and we have a good working relationship. She sits for me a couple of times a week for two hours.

I suppose spending so much time in one room, it does become a little like a teenager’s bedroom – an escape from the real world, a safe space to ‘create’ without disturbance as well as somewhere you don’t have to clear up! My mess is ordered mess, and I know where to find things. My brushes are always clean, and the palette is always scraped down at the end of the painting day. Like most occupations, painting is hard work, and I do battle with the canvas and many times it doesn't always have a satisfactory outcome. It's a ‘love hate’ thing, and although there are days when I dread going into the studio, on the whole, I would not swap this life for any other."

Find out more about Jacqueline on her artist profile page where you will also find a selection of her original paintings for sale.